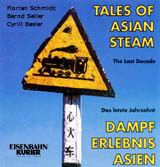 We all, I'm sure, have memories from our travels with steam which we treasure, magic moments we shall never forget. Most of mine seem to come from Asia: riding the last working Shay in the world through moonlit sweet smelling sugar cane fields in the Philippines; footplating a D52 2-8-2 on a heavy coal train in South Sumatra or a WP on an express in India; watching the procession of QJ hauled freights climbing up out of Zhongwei; bargaining a price for a worksplate ... the list could go on and on. Some of the best gricing I ever did was in Asia in the 1980s.

Finally here is a book which recaptures all those memories. "Tales of Asian Steam" is the work of two young Germans and a Swiss who made frequent trips to Asia in the 1990s and have now put together a photo album conveying in pictures and words the final full decade of steam working in the continent. This beautifully reproduced full colour album covers in greater or lesser detail 15 countries where steam still survived, mostly in regular service, though some resort is made to charter and special workings; inevitably the section on China is the longest and most comprehensive.

In their introduction the authors write that when they first planned the book, they set out to produce a photo album that was different and in their stated aim they have succeeded. The pictures in "Tales of Asian Steam" are consistently of the highest quality; most albums reproduce a few excellent shots and a majority of competently exposed and composed but really rather ordinary, unimaginative views - in "Tales of Asian Steam" these proportions are reversed. But not only are the photos good, there is also a wide variety of shots. Here are three photographers not only looking for good, interesting images of steam locomotives, but who also understand that there are many paths leading to Rome and who make extensive use of a wide range of photographic techniques: one style of photography, however outstanding the individual images it produces, does not make for a successful book. This is why Gifford's legendary "Each a Glimpse" works so well and why on mature reflection "Extreme Steam", reviewed here recently, is on balance not an entirely satisfactory book.

"Tales of Asian Steam" would then be worth purchasing for its photos alone. Its real strength, however, lies in its texts. Each picture is given an informative, extended caption, whilst each chapter is provided with a useful background introduction and a short essay on some aspect of photting steam in Asia: how to night-phot in Hai Phong harbour, the highs and lows of getting/just missing that master shot and so on. There's a wonderful piece describing working as a fireman on a QJ over the Jingpeng pass - one job vacancy I certainly won't be applying for. The authors succeed very well in conveying the atmosphere in Asia, what it is (soon to be was) like to be there photting steam. Above all they treat the Asians they encounter with respect: Asia here is not a bizarre, Disney world backdrop to what they are trying to achieve. The texts are given in both German and English, the latter in a rather idiosyncratic translation which doesn't always hit the mark; indeed, I noticed several complete mistranslations.

My only complaint about the book is that the authors - and in this they are not alone - sometimes blur the difference between a regular and a special working. To suggest that the Saturdays and Sundays only tourist train operated out of Kanchanburi in the late 1990s constituted "regular steam" is stretching credibility. A number of photos are obviously of special or charter trains; this is not always made clear in the accompanying captions.

Other photo albums reviewed here might have individual pictures superior to those found in "Tales of Asian Steam", but few can match it for its overall consistently high standard. This is probably the best photo album reviewed here and one of the most satisfying I've seen for many a year. Recommended without reservation.

Printed in Germany/Gedruckt in Deutschland