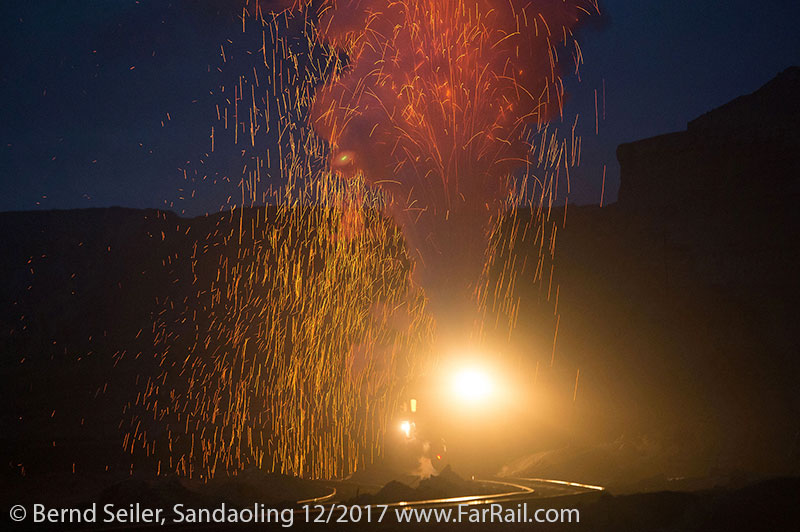 In the itinerary for February 2017, I wrote that steam in Sandaoling would be over unless there was a miracle. But exactly that has happened.

Never change a working system … the steam railway will continue to run, until 2020. And that’s not all - in 2018 they intend to run state railway wagons down to the pit, replacing some of their open hoppers. The loading place will be near the blue loader but half a level above it. From there they want to haul the trains through to Nanzhan. While the mine hoppers can hold a load of 34 tons, the state railway wagons are good for 70 tons payload, more than double the weight ! In December 2017, they told me they hope to haul trains of up to 20 state railway wagons. What this means, everyone can imagine – with one loco alone it’s impossible to haul this load out of the pit. Two would be the minimum. The final plan is not known yet but they have already started to haul ten state railway wagons out of the pit with one loco. It seems the saga continues: the finest and hardest steam spectacle on earth.

Since they decided to extend the life of steam, the locomotives are being driven much more gently. There are no hefty departures with slipping wheels, almost no sparks any more and the number of locomotives now serving the pit has been reduced to three. 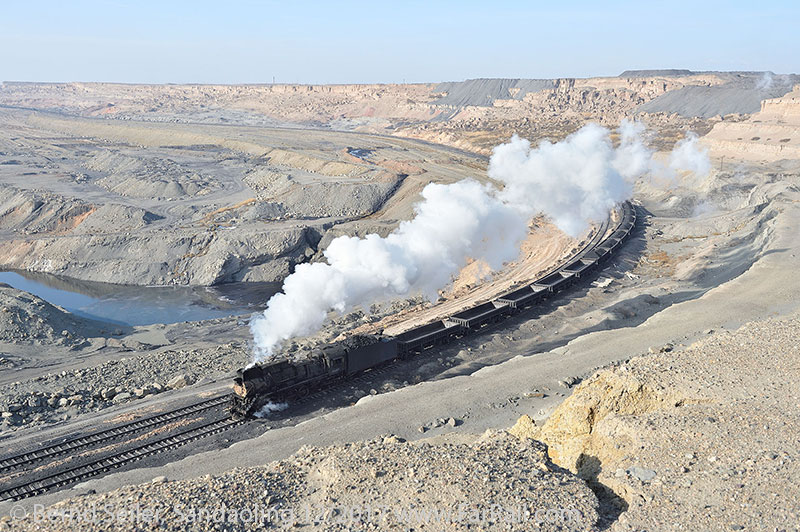 Two locomotives have escaped the grave yard and are in the workshop right now. After a hydraulic pressure test, the boilers will get an extended certificate. Tyres are being turned and other works carried out – there is still life in these old dogs! After it’s became clear they want to move more coal out of the pit, they brought two locos to the workshop for a complete overhaul: JS 8167 and JS 8197. Life is back in the workshop as well!

It seems the final gasp of steam is a roar!

Nanzhan will continue as well. They’ve closed the unproductive mine at Yijing but the rest of the operation is unchanged.

Sandaoling had eight locos in steam in late 2017. There are a few other steam locomotives scattered around China, but only locations with one or two shunting locos, rarely moving, and, at best, they produce boring situations in endless yards or on short links to industrial sites which are either inaccessible, not photogenic, or both. The narrow gauge line at Shibanxi is a tourist Mecca and, in my opinion, you would be better going to Wales if you want to see a properly preserved line. The plastic and, sometimes, colourful wagons in the trains are hardly worth the long journey down there. However, the last really worthwhile location still offers steam at its best: fighting against the physical limits of adhesion, where they climb steep gradients with their trains of coal. 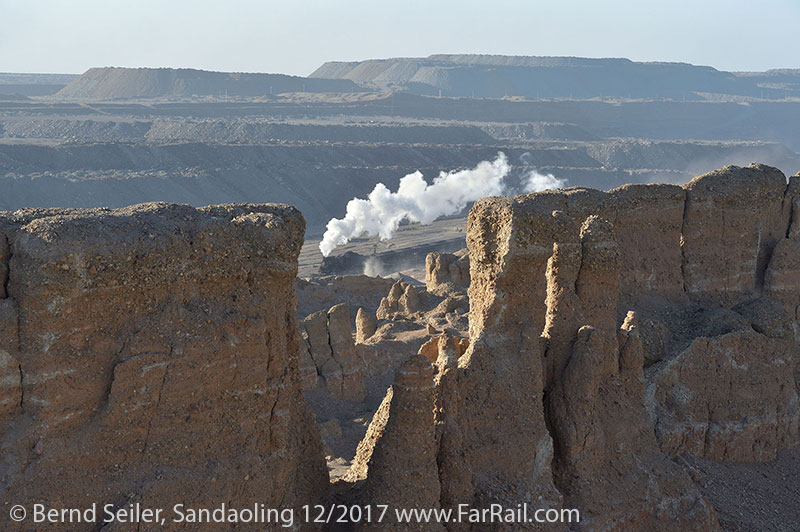 No matter whether you’re a newcomer to steam in China or a well experienced gricer who just wants to say goodbye to the era of steam, this tour is made for all your needs.

First of all, we must point out that we are at the edge of a steam-free age and we can’t rule out that lines may have changed to diesel locomotives before we arrive or even closed down completely. The itinerary is based on information from March 2018, several months before we go to these sites. There is no substitute if Sandaoling is dieselised or closed. No guarantees and virtually no refunds are possible. 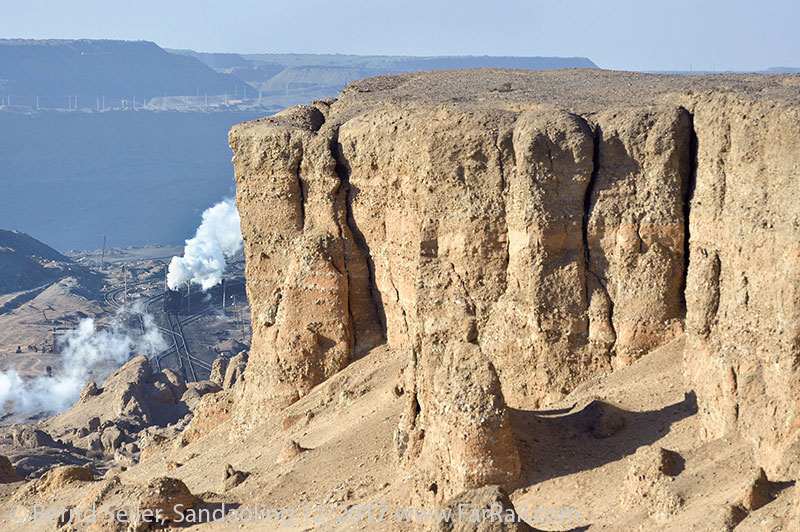 Sandaoling has become a Mecca for railway enthusiasts. In the moon-like countryside there are plenty of photographic opportunities. The time we’ve planned for the visit to the steamiest hole on earth won’t be boring. We’re sure that you’ll still find new positions on the last day of our visit and may think about extending your stay rather than leaving early.

All coal trains from the loading facilities deep in the pit must climb out of the open cast mine to reach the unloading point. This is a thrash of almost 3 miles for the heavy trains. In the best case you can witness this spectacle about every 20 minutes to half an hour. Sometimes there is a gap of up to four hours, but then it starts again! Most, if not all, of the coal trains are hauled chimney first out of the pit. 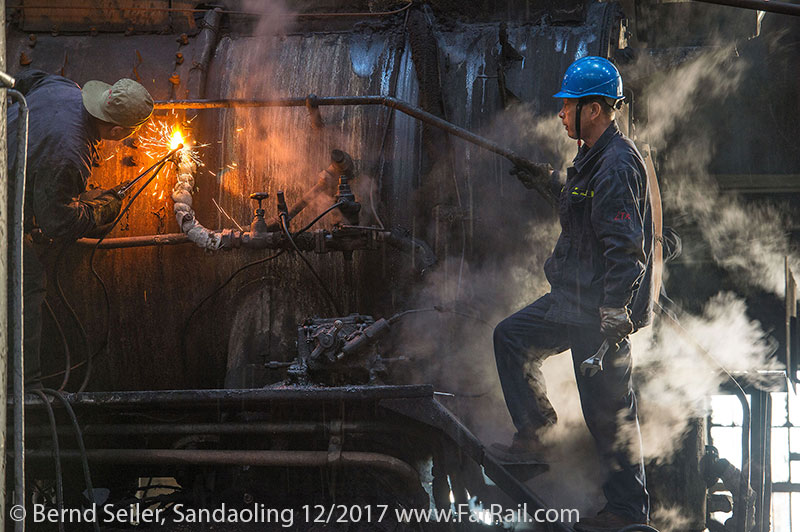 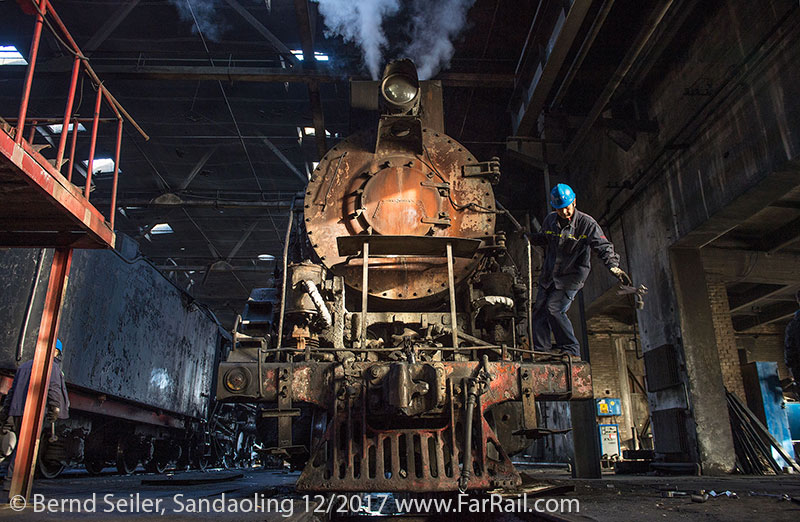 The trains are all “push-pull” trains with a small signal cabin built on the platform of the last wagon of each train. Empty trains are pushed into the mine and loaded trains are pulled loco first. With a semaphore on the roof of these miniature “cabooses”, the loco driver gets the signal forward. This is an unusual operation pattern in China and well worth photographing.

Sunsets in Sandaoling can be amazing. There are quite a lot of reasons to go there but the main reason is that normally there are several hard working JS’s in the area!

Trains to the deep mine in Erjing might see a hauling and a banking engine. It depends very much on the production and the availability of wagons. 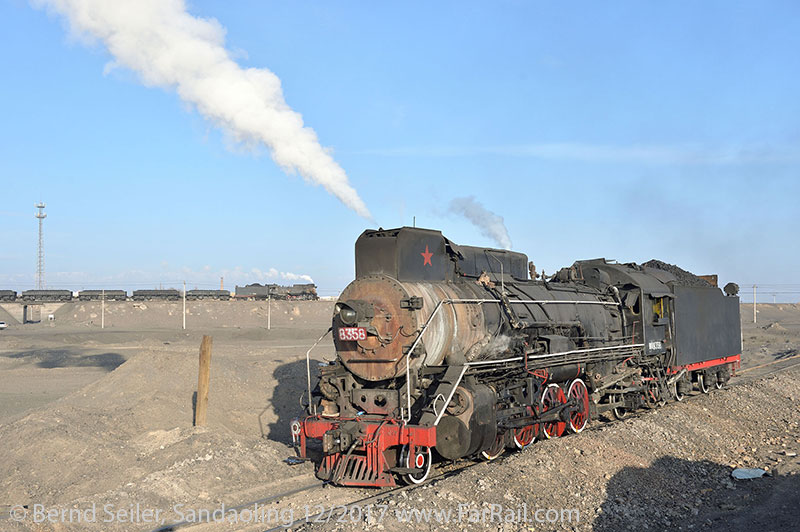 A visit to the workshop is, again, possible. Entrance fee was 150 Yuan in December 2017 (this price may change and is not included). The loading area within the pit is not permitted for a visit any more. In the open cast mine there are several cameras, so an unauthorised visit is not recommended either. But we’re allowed to walk down to the first station after the loading point. On this section, from the unloading point to the first station inside the pit, you can take dozens of good shots. Conclusion: still the greatest steam show on earth.

We expect a morning temperature around minus 10 (likely) to minus 20 (unlikely) degrees Centigrade in Sandaoling, while afternoons can be as mild as plus 5 to plus 10 degrees Centigrade. The photo equipment usually has no problems with these temperatures, it’s only the batteries. When not using them you should pack them in a warm place. We can warm up in our charter bus any time, so it’s not too difficult to stand the winter with the right clothing. The recent winters have been very mild during our stay in China. 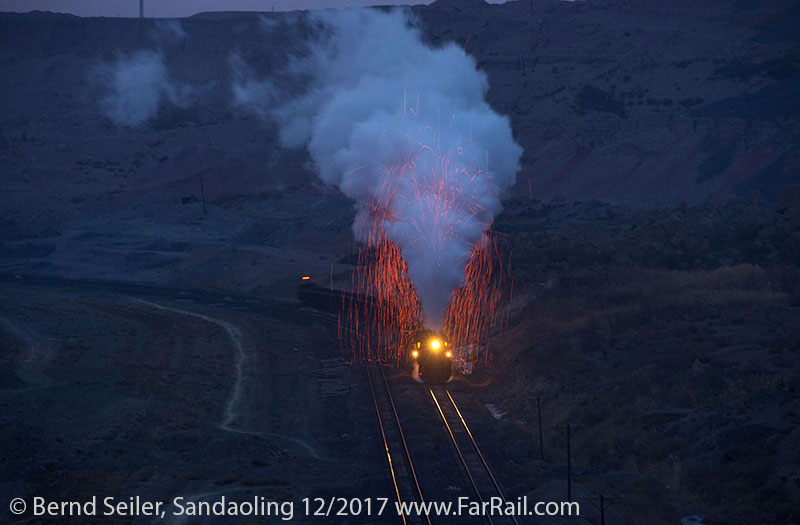 The voltage in China is 220 Volts, 50 Hz. You’ll need an adaptor for the power outlets. China uses the European mobile phone (GSM) standard.

This tour is designed for both dedicated photographers and video film makers. Our philosophy is to provide opportunities to get that perfect sunrise shot rather than a time consuming 5-star breakfast buffet. Breakfast and lunch may be served as a packed meal. For breakfast try the local noodle soup or dumplings, that’s a fantastic start to the day. Dinner is planned to be a proper (Chinese) meal. Times for meals can vary. Beverages are not included in the tour price. Our hotel in Sandaoling doesn’t offer breakfasts, but there are small restaurants just across the street.

We’re planning to do some night shots. Please take an appropriate tripod with you. Yes, even in the digital age a tripod does help a lot when it comes to tricky light situations! 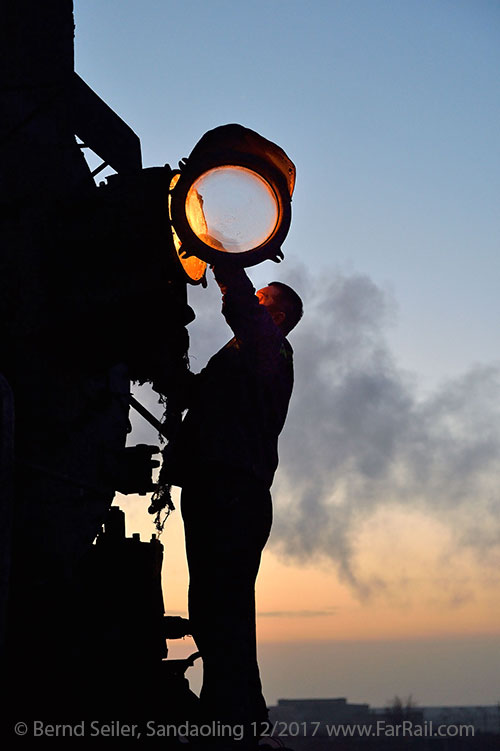 The coal mining industry in China is declining. They’re closing mines and dismissing a lot of staff, including safety guards. However, there are several CCTV cameras around the place. After our group left Sandaoling in December 2016, a different group of newly arrived railway enthusiasts seemed to feel too much at home between the tracks and didn’t care about jumping in front of moving trains across the tracks and generally behaving unsafely. Shortly after this, the local police arrived and cleared the whole site, including areas where the group had a permit for. On our February and December 2017 tours we didn’t face any problems. To avoid trouble you should always use common sense and stay well outside of the profile of moving trains. 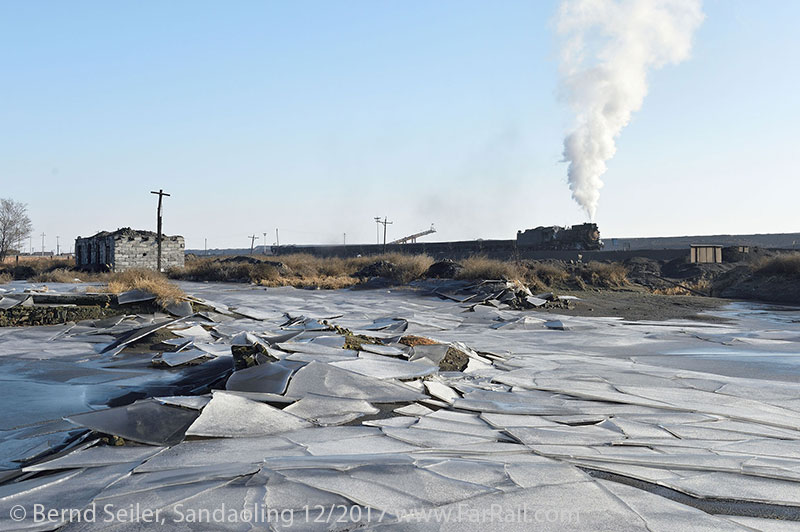 Hotels, charter buses and trains represent the standard of our host country, which may deviate from European or North American expectations. While we will endeavour to avoid long walks, some photo positions may require an extra bit of worthwhile effort. You should be physically fit if you want to go down to the bottom of the pit. Always remember that you need to climb back up the plus/minus 100 metres that you went down.

The hotels used will be of medium class but in remote areas, i.e. Sandaoling, that is very basic. A hot shower and a private bathroom with a western style toilet are available in all our hotels. 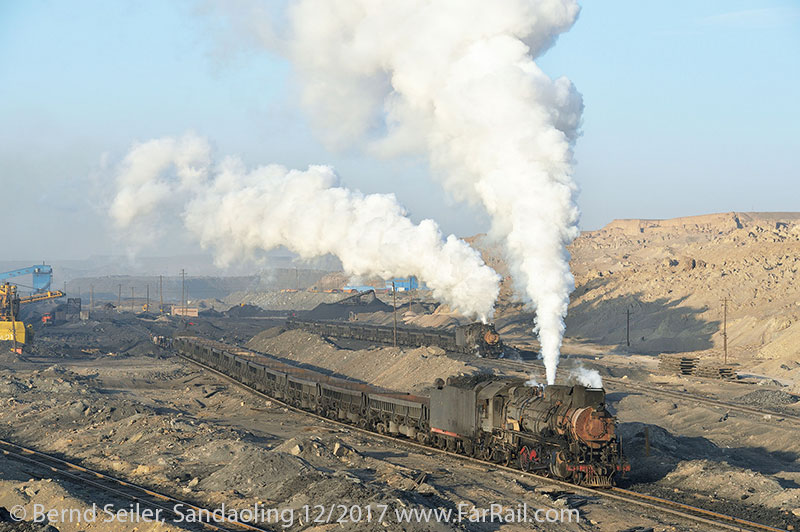 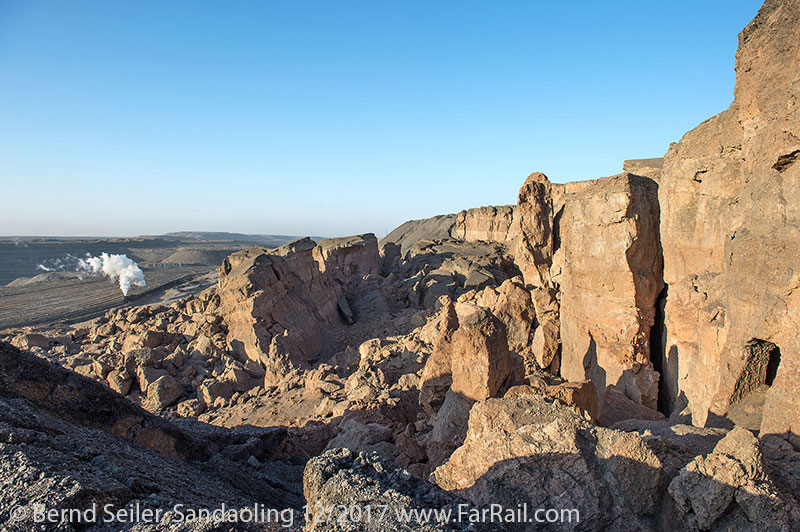 Hygienic and environmental standards in China do not conform to Central European, Australian or North American expectations. Carrying some toiletries in your photo bag is hence advisable. Please bear in mind that accommodation and transportation in China falls short of EU/US safety standards. Always use common sense when crossing roads and railway tracks. FarRail Tours Club cannot be held responsible and will not accept any liability whatsoever in the case of any accident or damage. We suggest you take out a comprehensive overseas accident and health insurance policy. You should also consider trip cancellation insurance. 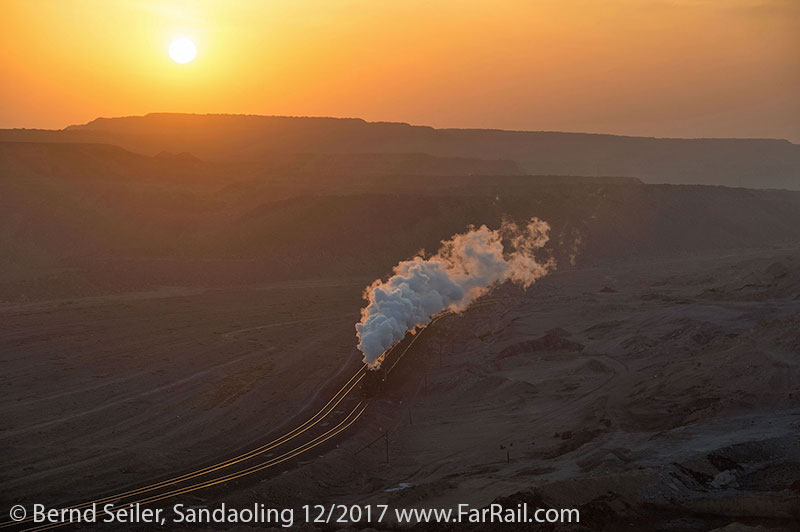